As snowflakes fall on the branches of spruce trees, Juho Junkkala and Jussi Reko wade in single file through snow that comes up to their knees. Reko is a Forest Specialist at Metsä Group. Junkkala, the forest owner, stops and bends down to examine the prints in the snow.

“A deer, and the tracks are pretty fresh,” he says.

Deer and elk are common in these areas.

The men are on Junkkala’s home estate in Eura, Satakunta, in Southwest Finland. Junkkala’s family has lived here since the 16th century. Over the years, the estate has been split, partitioned and then recombined repeatedly. It was transferred to Junkkala in a generational handover in 2010.

“I had quite enough of farm work in my childhood and made up my mind never to be a farmer. Instead, I went to university to study chemistry. But somewhere along the way, I had a change of heart,” Junkkala explains.

Talking about the forest and more on walks

The terrain rises to form a small hill before falling away towards the shores of Lake Koskeljärvi. Dark-barked spruce trees grow among the pine trees, the predominant species here. Here and there one can also spot birches and aspens.

Reko points to a spruce tree with a crown that has grown nearly half a metre long. Fertilisation to boost growth, carried out a couple of years ago, has clearly done its job.

Reko works as a Forest Specialist at Metsä Group’s Rauma district office. He has been Junkkala’s forest specialist since 2017. The two are in regular contact, more or less monthly, to discuss any forest management and felling that need to be carried out.

“Many things can be sorted out over the phone, but we try to go for walks in the forest whenever possible,” says Reko.

Until a dozen years ago Junkkala was not particularly interested in forest management.

“I thought I would focus on paid work and would not need to supplement my income by felling forest.”

The estate’s trees had an age structure typical of mature forests. The forests had been thinned too conservatively and were quite dense. Other forest management tasks had also been skipped.

On 26th of December 2011, Cyclone Dagmar swept over western Finland, blowing in gusts of up to 31.5 metres per second. On Junkkala’s estate, the storm damaged a pine stand that had been thinned earlier in the summer, after being left too dense a decade before.

“Dagmar wreaked havoc – hundreds of trees were left lying scattered everywhere. I immediately called a relative who worked in a forest management association and asked for advice. Luckily, hardly any trunks had actually snapped.”

The damage was unfortunate, but it spurred the new forest owner to make a firm decision.

“I resolved to put my forests in good shape to avoid similar setbacks in the future.”

Forest provides financial security and offers a source of recreation.

Forest on loan from future generations

There are more than 600,000 private forest owners like Junkkala in Finland. Together, they own nearly 60 per cent of Finland’s forest area. Private landowners are important to the forest industry, because they supply 80 per cent of the domestic wood the industry needs.

As for their goals, private forest owners are a diverse group. Some are attracted by the income from selling wood, while others place greater importance on the intangible values of forests. Most forest owners have multiple goals, meaning that the forest provides them with financial security and offers them a source of recreation.

“In my work, I try to consider what the forest owner is seeking and make my forest management proposals based on that. Many owners think of the forest as something we all own temporarily, and the goal is to maintain it as well as possible during our term,” says Reko.

The transgenerational approach of Finnish forest owners is best seen in forest renewal. For each tree felled, at least four seedlings are planted.

“Most owners make sure they establish a new forest as soon as possible, even though they know they will not be getting income from final felling during their lifetime.” 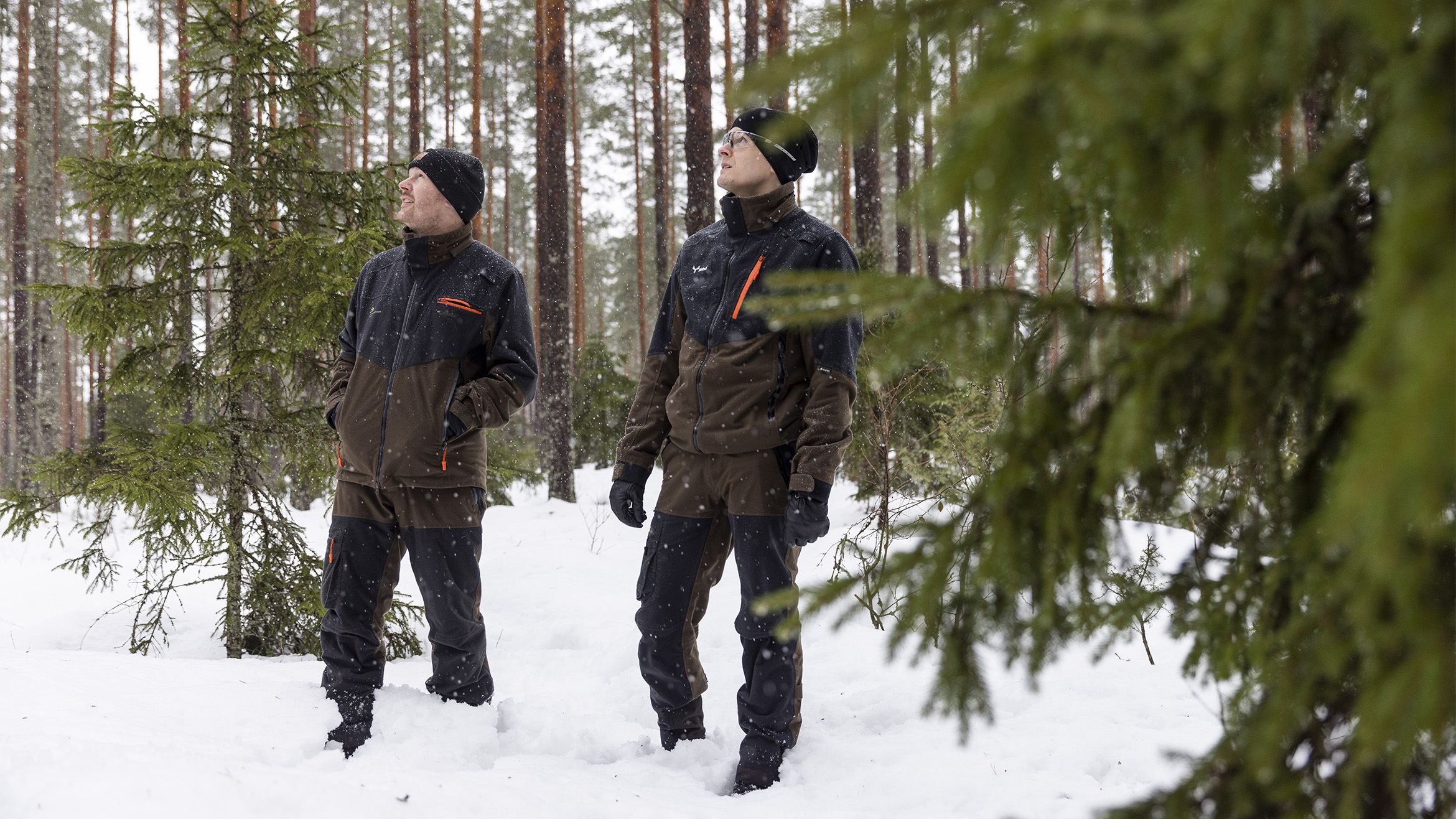 Clearing saw at work in the winter

When Junkkala began to actively manage his forests, he noticed what many others in his situation had. The more he worked in the forest, the more interested he became in forest management.

“I like forests to be well managed. When I am on the road these days, untended forests catch my eye more than they used to.”

He does most of the clearing saw work himself but commissions Metsä Group to take care of tasks like forest renewal and growth-enhancing fertilisation.

“On a grain farm, forest planting coincides with the most hectic time of the year. Also, it is not economical to transport only your own logs. However, the clearing saw is great if you want to do useful, profitable work.”

Although clear-cutting is usually associated with the summer months, Junkkala clears his forests in the winter.

“I am too lazy to go clearing forest in the heat of July. I have a lot more energy for it after I have rested and eaten well at Christmas. In January, I cleared 20 hectares in all.”

Junkkala and Reko stop at the top of the hill.

“During our elk hunt last autumn, the guy next to me saw a lynx here,” says Junkkala.

The game camera has also spotted a bear and a herd of wild boar.

The Finnish forests are homes to many other species, around 20,000 by some estimates. In commercial forests their habitats are created and also protected through nature management, which is a crucial part of forest management.

“We respect biodiversity, such as by leaving protective thickets, retention trees and high biodiversity stumps in the forest,” says Reko.

Protective thickets cover approximately hundred square metres and are excluded from forest management measures. One thicket is left for every new three-hectares of forest. The thickets provide protection and nutrition for birds and mammals, safeguarding the habitats of forest species. As their name suggests, retention trees are trees left in the forest. After they die, they turn into decaying wood, which preserves forest biodiversity.

High biodiversity stumps are trees cut at a height of two to four metres. They are usually broadleaved species. As they decay, they offer nesting trees to forest birds, saprotrophs and insects.

In Finland, forest use is guided by legislation but also by the requirements of forest certification. Forest certification tells consumers that the wood or wood product originates from sustainably managed forests.

“About 90 per cent of our commercial forests are PEFC certified. FSC® certified forests account for around 10 per cent in Finland, and their share is continuing to increase,” says Reko.

Many forest owners protect their forests voluntarily. This can mean they do not fell trees in areas of special personal significance, like good mushroom grounds, and they may also save trees of special shapes.

Junkkala does no felling in a small mire on his estate, and at a steep rock face.

“The cliff is really impressive. It is nearly vertical, with gnarled pine trees growing at the top. I often go skiing there in the winter.”

Reko points out that valuable Finnish nature sites can also be offered for protection through the METSO programme, which promotes forest biodiversity and is coordinated by the Finnish Ministry of the Environment and the Ministry of Agriculture and Forestry. Through METSO, private forest owners can receive compensation for protecting their forest.

The better the condition of the forest, the more efficient its carbon sink.

A mixed forest is resilient

Trees rest in the winter, but things get going when spring arrives. During the growing season in the spring, lasting 70 days or so, trees can grow by as much as two to three centimetres a day.

A growing forest works as a carbon sink, binding carbon dioxide from the atmosphere. The better the condition of the forest, the more efficient its carbon sink.

There are fears that climate change will increase the risk of dry spells, storm damage and various fungal and insect pests. One way to safeguard the vitality of forests in the face of changing climate conditions is to grow them as mixed forests with two or more species.

The mature pine forest on Junkkala’s estate will not be due for renewal for another ten years, but the forest owner and forest specialist already have a plan for when the time is ripe.

“The top of the hill is slightly more barren, so we will use pine seedlings for renewal there and plant spruce in the lusher parts. Birch and other broadleaved trees will emerge naturally,” says Reko.

It is now afternoon, and Junkkala glances at his watch. It is almost time to pick up the youngest children from day care, and the older ones will be returning from school soon as well.

The oldest of the family’s four children is 11, and the youngest soon five. Whether any of them will want to continue farming is not something the estate’s owner worries about. It is more important for him to spend time together playing football, skiing or cycling.

This article was originally published in Timber Magazine issue 2022-2023.

Watch a video about this forest walk

Jussi Reko, Forest specialist
“I have worked as a Forest Specialist at Metsä Group’s Rauma district office for five years. What I like most about my work is the customers – and that I get to spend part of my workday in the forest.”

Juho Junkkala, Forest owner
“I am more interested in forest management and forest-related questions now than I was when I took on the forest. When I am on the road, untended forests now catch my eye in a different way.”