Antti Koskinen, Manager at AFRY Management Consulting, says he has seen nothing like it in a career spanning more than two decades.

“2021 was an unprecedented year for those who monitor the industry.”

The price rally has been compared to the upswing caused by the Korean War in 1951, which also led to unprecedented growth in the Finnish sawmill industry.

Volatility greatest in the US

The greatest volatility was in the United States in 2021. In May, lumber futures rose above $1,600 per thousand board foot. By late summer, the price had fallen below $500.

China in turn boosted its imports of logs instead of sawn timber.

“In China, the rise in sawn timber prices was more moderate. This may have been partly because the strong construction boom of recent years has slowed slightly there.”

Tuomo Neuvonen says that developments in the US timber market especially have significantly affected price formation in other markets. Neuvonen is Project Manager at Fastmarkets FOEX, which provides price indices for the forest industry.

“2020 was a slow year because of the outbreak of the pandemic. There seemed to be only dark clouds ahead, but the market outlook changed completely in 2021.”

After a downtick, construction started to grow faster than expected, driven by the strong performance of the economy, the recovery of employment and low interest rates. House building has also been boosted by the increase in remote working during the pandemic and the need for more space in homes.

Sawn timber production capacity in the United States could not meet the extra demand, and Canada could not make up the difference.

“It gave European producers the opportunity to increase exports across the Atlantic,” Neuvonen notes.

Demand in the European market also remained better than expected. Contrary to initial expectations, the pandemic did not paralyse the economy and new construction. There was even an increase in renovation and home repairs.

Bottlenecks in the supply of sawn timber increased prices. After the start of the pandemic, many sawmills limited their production because demand was expected to slow. Deliveries to international markets were complicated by logistical problems. Ports were congested and there was a shortage of sea containers.

Especially in North America, the supply of sawn timber was restricted by exceptional weather conditions. Forest fires hurt the availability of wood. In addition, major Canadian timber production areas in British Columbia were affected by floods, which disrupted transport.

In the United States, the price of sawn timber started to decline sharply from its peak in the middle of 2021, and a couple of months later in Europe. Buyers were no longer prepared to pay high prices, and instead cut back their purchases and tried to operate from stocks.

The fall in prices was also driven by an increase in the supply of sawn timber as high prices spurred sawmills to increase production to full capacity. Production was gradually ramped up during the pandemic, especially in North America.

After a sharp decline, the prices of sawn timber started to rise again in key markets at the end of 2021 and continued to rise in early 2022.

Koskinen says the rapidly changing situation during the pandemic has made it exceptionally difficult to forecast price developments in the short term.

“In the North American market, price fluctuations of sawn timber are greater and faster than in Europe. Demand is strongly linked to low-rise housing production, which can vary greatly as economic conditions change.”

Furthermore, sawn timber is also traded speculatively in the United States, in the same way as commodities like metals or agricultural products. Lumber futures on the New York Stock Exchange are an example of this.

Trade is also affected by politics

Morten Bergsten, CEO at Danish-based Bergsten Timber, has been monitoring the international market for sawn timber since the mid-1980s. He too thinks that predicting price developments is increasingly challenging.

“One reason is that the sawn timber market has become more global. In response to supply and demand, there is now much more international trade in sawn timber than in the past,” he explains.

In addition to the traditional laws of supply and demand, prices are influenced by many other factors. These include measures to limit foreign trade, by which the world trading powers protect their own interests.

In November 2021, the United States doubled its duties on wood imports from Canada to 17.9 per cent. Russia’s export bans on raw wood and export duties on low-quality sawn timber are having a strong impact on Asian markets.

In the long term, the price of wood may be affected by climate change.

Europe and North America are the largest markets for sawn timber, but Asia, especially China, has grown in importance year by year. North Africa and the Middle East are also traditionally important to sawmills.

Sawn timber prices in different continents tend to follow each other, but there are also regional differences in price formation, influenced partly by different distribution channels.

In Europe, the market is driven by wholesalers and sawmill companies’ direct sales to the largest customers. The United States depends heavily on retail chains that sell timber to Do It Yourself (DIY) builders. On the other hand, the Chinese market is dominated by large trading houses.

The price of sawn timber is primarily influenced by demand from the main wood applications, such as private and public construction, civil infrastructure and furniture industry.

Demand is also influenced by the availability and price of sawlogs. For example, sawmills have been closed in British Columbia because of the shortage of logs caused by insect damage. New sawmills have been built in the US South, where there is good access to raw material.

“In the long term, the price of wood may also be affected by climate change,” Neuvonen adds.

Prices are seeking a new normal

Bergsten expects timber price spikes to continue at least to some extent. Economic cycles come and go. On the supply side, sudden changes may be caused by exceptional natural conditions, export restrictions and geopolitics.

“However, wood construction, driven by sustainable development trends, is a strong catalyst for long-term sawn timber demand,” he says.
Bergsten believes that US demand for sawn timber will remain at a high level.

“The country’s own sawn timber production is not enough to satisfy demand, and Canada is unable to serve the US timber market as it used to. This will inevitably lead to continuing sawn timber exports from Europe in the future.”

Cause for timber industry optimism

In Europe the demand situation also looks bright to Bergsten.

“Political decision-makers favour wood construction, but private investors have also jumped on the construction green wave. In the sawn timber business, the future looks good for the entire value chain, from forest owners to timber sellers,” he says.

Bergsten believes that, despite challenges and uncertainties, the timber industry has cause for optimism in the long term. The potential of wood to mitigate climate change is already widely recognised. This means the share of wood as a building material will increase and support demand.

“It is possible that sawn timber prices will stabilise at a higher level than before. However, we do not yet know what the new normal will be.” 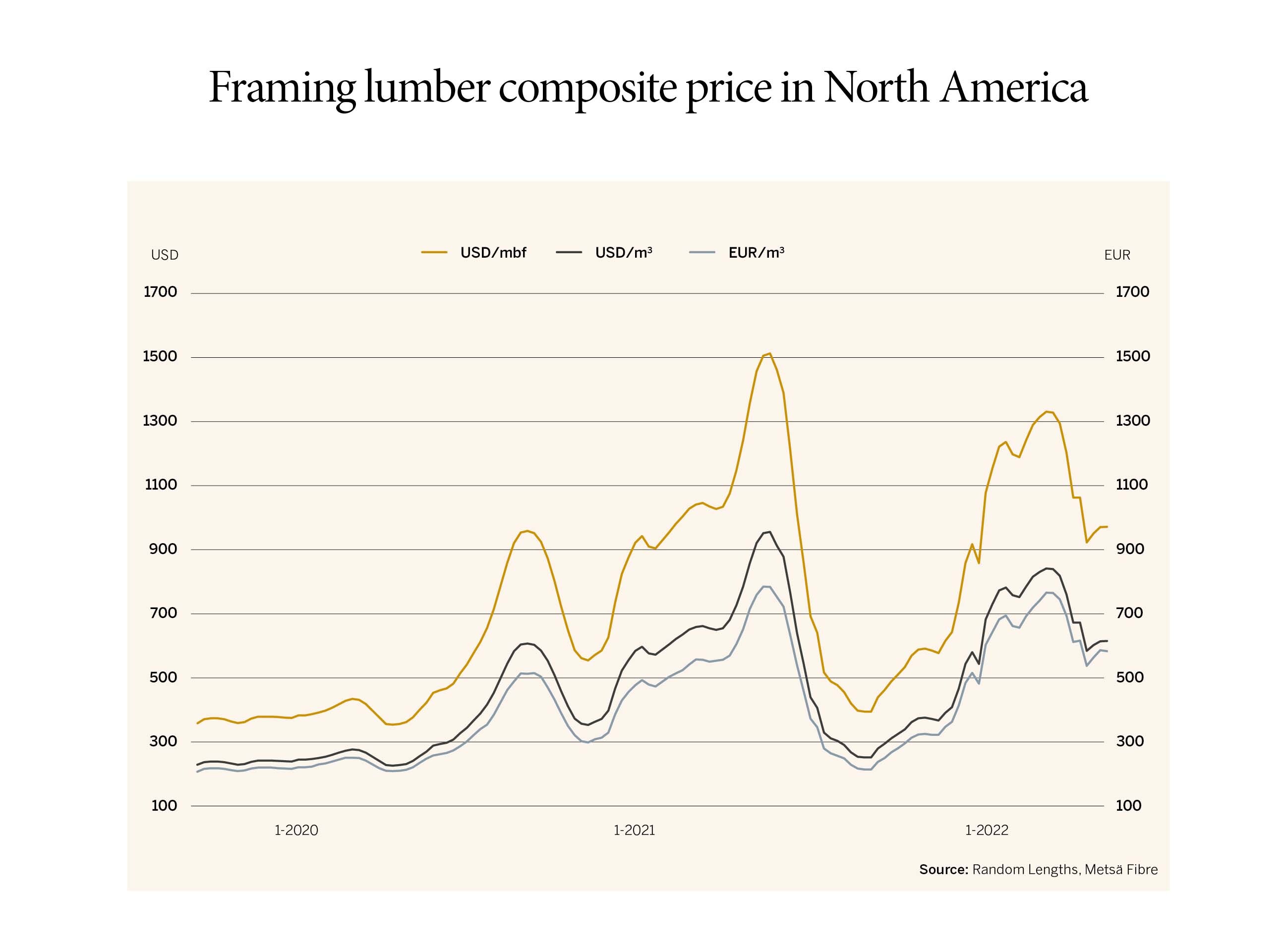 This article was originally published in Timber Magazine issue 2022–2023.

Impacts of war difficult to predict

Russia’s attack on Ukraine in the spring of 2022 and the ensuing war have increased uncertainty in the sawn timber markets.

Before the conflict, Russia, Belarus and Ukraine annually supplied the EU market with approximately nine million cubic metres of sawn timber, half of which came from Russia. Since the onset of the war, the EU has imposed a total ban on imports of wood and wood products from Russia and Belarus.

“Imports from these countries have accounted for roughly ten per cent of the demand in EU countries,” says Antti Koskinen at AFRY Management Consulting.

As a result of the war and the related economic sanctions, Russian and Belarusian sawn timber sales to the EU are now on hold. Koskinen and Morten Bergsten both say the impact of the war on economic growth and consequently on the demand for sawn timber is difficult to predict at this point.

“We have heard expectations of weaker growth from individual countries but lack an overall picture. The outlook is hazy.”

Antti Koskinen
Manager at AFRY Management Consulting who has been monitoring the forest industry for more than two decades.

Morten Bergsten
Managing Director of Danish-based Bergsten Timber and Vice President of the European Timber Trade Federation. More than 30 years’ experience in the wholesale and import of sawn timber.